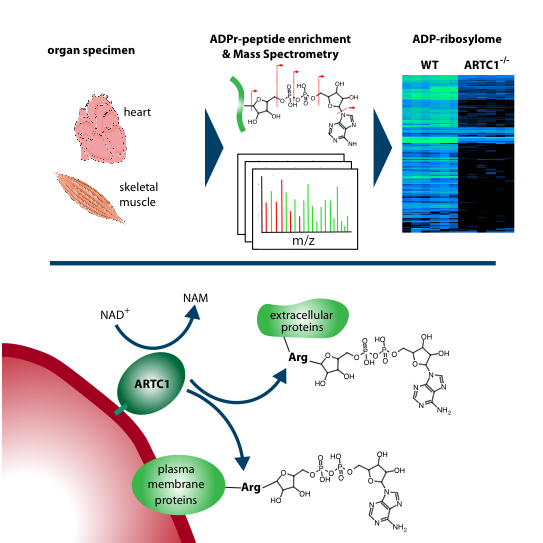 Cells that experience stress such as occurring in cancer or inflammatory diseases use various signals to induce a stress response and communicate the stress levels to other cells in the body. One of those signals is a protein modification called ADP-ribosylation. Knowing the precise position and function of ADP-ribosylation on proteins allows the development of new diagnostic and therapeutic tools in various diseases including cancer, infections and neurodegenerative diseases.

Altered ADP-ribosylation status may be a sign of disease
Why is this study important? Prof. Hottiger answers: “With this study we do not just present another method to study proteins and their modification. Together with our previous work and that from other groups in the field, our new results and technical capabilities provide the basis for the future investigations of ADP-ribosylation and its medical implications”. Although ADP-ribosylation is known as a biological process already for 60 years, the functional role of it is still largely unknown, which is due to hitherto lack of appropriate research tools. Still, there is already strong medical evidence that ADP-ribosylation is involved in pathogenic processes and that inhibitors of intracellular ADP-ribosylation, so called PARP inhibitors, are useful in treating cancers such as breast and ovary cancer and may be beneficial in inflammatory conditions.

New diagnostic and therapeutic opportunities
Being now able to study all potential ADP-ribosylated proteins in biopsies or blood at once allows studying the dynamics of ADP-ribosylation at individual protein positions in health and disease. “During the last two years, we have prepared ourselves for this moment and, in parallel, developed the first in kind antibody directed to single-modified, so called mono-ADP-ribosylated proteins” elucidates Prof. Hottiger. “In collaboration with the University Hospital of Zurich, we obtained the first evidence that such antibodies against mono-ADP-ribosylation may be very useful as prognostic tools in certain cancer types”. Prof. Hottiger’s group is now in the process of developing modification- and protein-specific monoclonal antibodies that will allow the determination of the ADP-ribosylation status of a particular protein. In addition, they want to address whether such antibodies would have a therapeutic potential for instance in cancer.

“There is a huge, still undiscovered landscape out there”, concludes Prof. Hottiger, “we still need to learn a lot about ADP-ribosylation, but we are kind of convinced that the medical implications and benefits for patients might be enormous.”