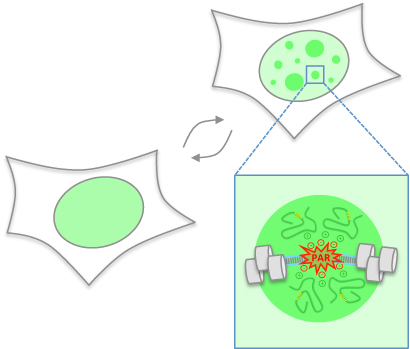 In collaboration with the group of Prof. Jiri Lukas in Copenhagen, Denmark, the Altmeyer lab recently discovered that, in response to DNA damage, membrane-less compartmentalization is achieved by the regulated phase separation of intrinsically disordered proteins. This liquid demixing is initiated by poly(ADP-ribose) (PAR), a nucleic acid-like polymer that is induced at DNA break sites and acts as nucleation event for the rapid and reversible assembly of various unstructured, aggregation-prone proteins. The dynamic compartmentalization through PAR-seeded liquid demixing orchestrates the recruitment kinetics of repair proteins and shields the broken DNA from unwanted reactions.

The study, which was published on August 19, 2015 in Nature Communications, suggests that PAR-seeded liquid demixing is a general mechanism to dynamically reorganize the soluble nuclear space. In light of the aggregation-prone nature of the PAR-responsive intrinsically disordered proteins, deregulation of PAR-seeded liquid demixing may have important implications for pathological protein aggregation during neurodegeneration and aging.