A yardstick to measure the malignancy of prostate cancer 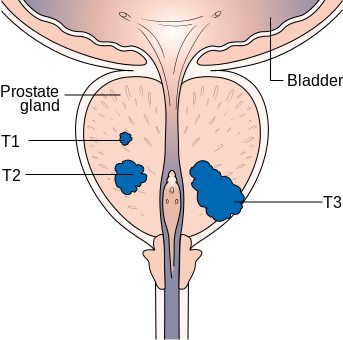 A protein that influences the epigenetic characteristics of tumor cells is directly linked to the grade of malignancy of prostate cancer. This key discovery has been made by a team of scientists from the University of Zurich, German Cancer Research Center (DKFZ), Hamburg-Eppendorf University Hospital, Heidelberg University, and other institutes in a study of 7,700 samples of tumor tissue. The detection of this biomarker may serve as an indicator of the likelihood that the disease may take an aggressive course, and may thus be helpful in choosing an appropriate treatment.

When cancer is diagnosed, the grade of its malignancy is a central concern for both patients and their physicians. This value is used to determine how intensively and how radically the cancer must be treated. Particularly in the case of prostate cancer, the disease can take widely varying courses in different patients. Therefore, cancer researchers have been looking for measurable, reliable biomarkers that give clues about the aggressiveness of a tumor in order to choose an appropriate therapy.

In many types of cancer, alterations in a tumor's genetic material indicate how dangerous the cancer is. Prostate cancer, however, exhibits far fewer of these mutations than other cancer types. "We have therefore suspected that prostate cancer is driven primarily by alterations in epigenetic characteristics, that is, chemical changes in the genetic material that do not affect the sequence of DNA building blocks," says Prof. Christoph Plass from the German Cancer Research Center (Deutsches Krebsforschungszentrum, DKFZ), who is one of the project leaders in the current publication.

For a long time, the means by which epigenetic patterns in the DNA of cancer cells undergo changes have remained a mystery. Scientists have discovered specific cellular proteins that can have a major influence on such patterns. A network of researchers from the University of Zurich, German Cancer Research Center (DKFZ), Hamburg-Eppendorf University Hospital, Heidelberg University, and other institutes have been searching for regulatory proteins that change the epigenetic characteristics of prostate cancer cells and may thus have an impact on the course of the disease.

In a first step, the scientists searched databases containing molecular information on a large number of prostate cancer cases. Using these data, they investigated whether a particular, known epigenetic regulatory protein is expressed in tumor cells at significantly higher or lower levels than in healthy cells from the same patient.

The researchers found the most obvious differences in the expression of a protein called BAZ2A. "The normal known function of this protein is to suppress factories that produce cellular proteins and thus affect the viability of cells," says Dr. Raffaella Santoro from the University of Zurich, who is the other project leader of this work and expert of BAZ2A protein. "But when we turned off BAZ2A in the cell lines of metastasizing prostate cancer, their growth was paradoxically slowed." Further studies showed that higher levels of BAZ2A increased specific malignant properties of prostate cancer cells, including their mobility and capacity to invade surrounding tissue. A detailed molecular analysis of prostate cancer cells showed that the overproduction of BAZ2A led to alterations in epigenetic patterns which then inhibited the activity of a number of cancer-suppressing genes.

The scientists therefore suspected that the overexpression of BAZ2A might have a direct impact on the malignancy of prostate cancer and thus serve as a predictor for the course of the disease. The team investigated this hypothesis using nearly 7,700 tissue samples obtained from prostate cancer patients. They discovered that the higher the BAZ2A levels in the tissue were, the more advanced the tumor was at the time of diagnosis, the more frequently it had already spread and formed metastases, and the higher patients' PSA levels were.

"BAZ2A seems to have a direct influence on the aggressiveness of prostate cancer," Plass says. "This suggests that levels of BAZ2A expression may serve as a valuable predictor of disease progression. Of course, this still needs to be clinically confirmed. Particularly in patients whose other clinical results indicate a medium risk, BAZ2A expression may provide important clues for the actual chances of recurrence. This would help physicians and patients choose the most promising treatment.